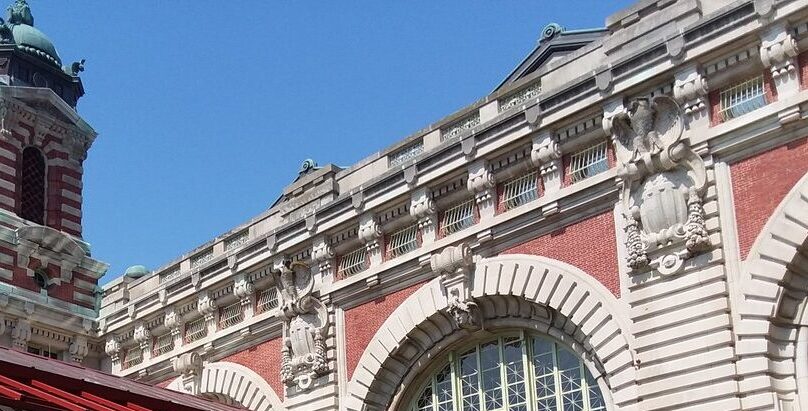 “This red brick world of Ellis Island was their gateway, a place of almost mythic transformation. Through one door entered Russians, Greeks, Italians, Jews. Through another door they emerged Americans.”

Ellis Island closed in November 1954. Quota laws had drastically reduced the number of immigrants entering the U.S. The silent and empty immigration depot rapidly deteriorated into a ghostly complex of dilapidated buildings. Although President Lyndon B. Johnson signed a proclamation in 1965 recognizing the historical significance of Ellis Island by incorporating it into the Statue of Liberty National Monument, the island and its Renaissance Revival structures remained dormant for a quarter century.

On the heels of celebrating Lady Liberty’s restoration, The Statue of Liberty-Ellis Island Foundation turned its attention to Ellis Island for what would be the largest historic restoration in U.S. history.

“Ellis Island was a wreck. There were trees growing in the Great Hall. On my first visit there with Mr. Iacocca I thought to myself, “Oh my! What did we get ourselves into?”

“For the first 18 months of our work at Ellis Island, all we did was blow hot air through large tubes throughout the building. If they’d just closed the windows when they left!

“During this blowing dry process paint began to chip off, revealing some very interesting graffiti that had been written on the walls by the immigrants. Obviously we preserved that graffiti because they were telling stories – either about their condition, or about their lives, or about what the future was for them, or what they hoped the future was for them. Finding this graffiti was a significant moment that no one had planned on.”

Bringing Ellis Back To Life

The museum focused on 1892 through 1954: The Ellis Years. To replicate what most travelers encountered upon arriving at Ellis Island, the team of experts leading the restoration and museum development replicated the building’s design from the 1918-1924 period – the peak years of Ellis immigration.

Special focus was given to the Great Hall, which had served as the Registry Room through which every Ellis Island immigrant was processed. Caverness yet beautiful, with sweeping views of the harbor, Lower Manhattan, and Liberty Island, the Great Hall is an awesome and intimidating space. One can hardly image how overwhelming it was for immigrants who had left home, been at sea for weeks, and were now crowded among thousands of other travelers awaiting a (hopefully) brief interview with an Immigration Officer before being permitted to descend the Stairs of Separation to begin a new life in America.

Many Ellis Island immigrants and first-generation American offspring played an integral role in creating the museum experience. They recorded oral histories and donated personal effects to help paint a picture of the immigrant experience. The “Treasures from Home” exhibit is a visitor favorite with its examples of ethnic clothing, household items, musical instruments, and cherished keepsakes.

The American Immigrant Wall of Honor

Similar to their support for the Statue of Liberty initiative, people across the country contributed enthusiastically to the Ellis Island project. At the time, 40 percent of Americans could trace their family to Ellis Island. Giving to the restoration campaign was an opportunity to celebrate and share with the world the history of each immigrant’s journey.

The Foundation created The American Immigrant Wall of Honor to commemorate this support and honor those immigrants for posterity.

Since its unveiling in 1990, nearly 800,000 names have been engraved on the Wall of Honor. Tens of thousands visit Ellis Island each year to see their family’s inscription.

“This is a very emotional, dramatic moment for people. They come to look for their names or the names of their ancestors, or they have family gatherings at Ellis Island to see the name. It’s a very important moment in their lives.” Stephen A. Briganti

Public response to the Ellis Island museum was overwhelming. Almost immediately, the National Park Service and Statue of Liberty-Ellis Island Foundation realized the museum needed to be expanded.

The Foundation created the American Family Immigration History Center at Ellis Island. The History Center, and its online database, made Ellis Island arrival records readily available (and free) to the public for the first time and reignited interest in family connections to Ellis Island.

Expansion plans also presented the opportunity to tell America’s complete immigration story. “Journeys: The Peopling of America – 1550s-1890“ explores the stories of Native Americans, enslaved people, and immigration during the Colonial and Victorian eras until the opening of Ellis Island. “The Journey: New Eras of Immigration” gallery focuses on immigration from 1954 to present times. It reflects the rapid pace of technological progress that has characterized migration since World War II and the challenges and opportunities faced by immigrants in the modern world.

With its more comprehensive content, the museum was renamed The Ellis Island National Museum of Immigration.

“Ellis Island Welcome 2020” is specially commissioned by The Statue of Liberty-Ellis Island Foundation, Inc. to commemorate the 30th anniversary of the Ellis Island National Museum of Immigration. This exquisite spinner ornament, handcrafted and manufactured in Rhode Island, can be hung by its gold cord and is presented in a lovely inscribed gift box.

Proceeds support the important work of The Statue of Liberty-Ellis Island Foundation, Inc.

Through its mission, The Statue of Liberty-Ellis Island Foundation is committed to fostering knowledge and interest in the history of these two great American monuments. While nothing can replace an in-person visit, the Foundation’s library of remote learning experiences offer a taste.

Donations to the Foundation to help maintain and expand these educational experiences.

In 1982, President Ronald Reagan asked Lee Iacocca, then Chairman of the Chrysler Corporation, to head a private sector effort to raise funds for and manage the restoration and preservation of the Statue of Liberty and Ellis Island for their respective centennials. The Statue of Liberty-Ellis Island Foundation was founded. Through its generous contributors, the Foundation has raised hundreds of millions of dollars - all from private donations.
Learn More About the Foundation